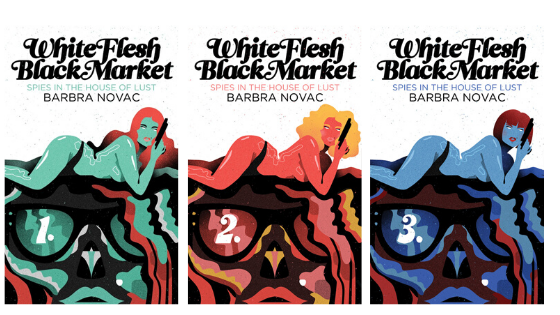 AJAX Books is thrilled to announce we are publishing the written pornography of Barbra Novac.

As fans of dirty books from way back, we have chased publishing writes for Barbra’s Books ever since she went off the radar before completing her White Flesh Black Market series.

Barbra wrote and self-published White Flesh, Black Market Book One back in 2013.

A member of our little book club happened upon the books when reading around about The Baroness series by Paul Kenyon.

We are great fans of The Baroness series and were excited to see that a writer was taking up the mantle and donning some fan writing.

However, nothing prepared us for how fun and exciting White Flesh Black Market Book One was.

What we loved about Barbra’s book was the use of 1960’s slang (particularly in the sex scenes) and the use of irony and humor.

The storyline followed more of a James Bond theme rather than The Baroness, but it was clear to us right away that Barbra based her three female protagonists on iconic and classic characters that we recognized immediately.

So where were the second and third books?

Like many others, we contacted Barbra to find out where book two and book three were.

Barbra was evasive at first. Polite and thankful for our gushing praise, she was distant. It occurred to us that she was feeling the pressure of coming up with the next book.

Then we discovered she was writing, but writing erotica romance, commonly called ‘Romantica’ at the time. She had books published with respected publishers like LooseID and Siren Books.

She promised us a second book, but the weeks turned into months and there didn’t seem to be a second installment.

We sent her an email offering to publish for her in 2018, but heard nothing back.

Then, miracle of miracles, in 2019 Barbra contacted us to offer us the three books. She told us that Book Two and Book Three languished in early drafts and loose notes.

We asked her about completing them both to first draft phase and offered to handle all edits and publishing for her.

She agreed. She also agreed to have these first drafts to us early 2020.

When we got the drafts to the second and third books, we were amazed. Same story principles, same protagonists, but Barbra had come of age. The works were more complex, filled with deeper interesting nuances, and laced with fascinating commentary on the 1960’s.

We were thrilled with the first drafts. It was like the first book had grown up and turned into something better, stronger, and funnier.

Barbra still uses the pulp novels of the 60’s and 70’s as her base, but the books were deeper now. They included international politics, more sex, and stronger characterization.

While still light and funny, the books had taken on that unforgettable quality that great books always have.

Editing was a bit of a process, and many of us here at AJAX Books were interrupted by the COVID-19 lockdowns and other complications. However, we got our editing done and published the books.

We have retained the glorious WEBUYYOURKIDS covers of the 2013 editions, only now we have fleshed the books out to make three proper novel-sized books.

We are incredibly proud of these books, and see them standing head and shoulders above other books in the market place.

But most of all we are just so glad to have been able to bring these great books to a wider public.

But don’t just trust us. Get a copy of book one yourself, and see what you think.

We promise we won’t say ‘we told you so.’

The above post has been updated to reflect a more current situation.