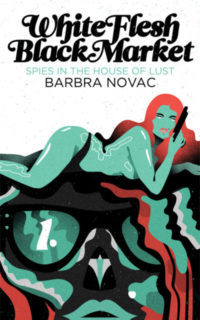 Golitsyn continued. “You may do whatever you want. There are no rules here. These women are whores, hand-picked for us, and they are used to the roughest treatment. No questions asked of us tonight. We are in the company of our reward and they belong to us in every way.”

This last statement brought the greatest roar from the men. They beat their fists on the table, Northers and Mils with them. The women removed their flags. Northers turned to Mils.

“Where did they get this lot?”

“No idea. I’ve never seen women like this. These women are groomed, and the best of their gene pool. No brothel in the world would give a bunch of spies women of this quality. Someone sent them. Soviets – or someone else.”

Mils continued, but with music added to the hysteria, his words dissolved into distant murmurs. Northers noticed they were playing a seductive compilation of national anthems as the women stripped. It was a blasphemous mockery.

“What did you say?” Northers placed his ear next to Mils mouth. The Brazilian woman unhooked her enormous bra, spread her legs and bent at the waist in front of him.

“No Russians!” Mils shouted above the deafening roar of the drunken hoard. “There are no Russian women here.”

Northers forgot to respond because the Indian woman was peeling panties off the damp entrance of the Brazilian woman. Common sense abandoned him. He glanced at Golitsyn, who dipped his moon face in the American woman’s nether lips. His bulging tongue was an oily animal as it darted in and out between her thighs which spread wide as her back arched into his face. She bounced her behind as if it rested on a large rubber ball, with Golitsyn clutching at the soft fleshy mounds as he fed.

The men tore at their clothes. Half had their fat sausages poking out of their flies, as they tugged on their stiff rods, dragging foreskin back then rolling it forward in well-practised moves. They sucked an offered nipple or sank their tongues into wet, willing female sheaths. Red cheeks glistened with mingled love juice and saliva as men came up for air then took deep dives back into hot pink treasure.

The room smelled of aroused women, the sounds of slurps, female moans and masculine grunts ricocheting off the walls. Miss Ireland lay on her back in the middle of the table while Miss Japan performed cunnilingus on her. Their engagement heightened by their wish to give pleasure with uninhibited licentiousness. Miss Japan’s own sweet pulpy portal glistened despite getting no attention. A single drop of clear thick juice fell from the hair of her loins to the table beneath her. Northers sat back to savour the display before it got too much. When Miss Ireland placed her hand on the back of the girl’s head and screamed and ground her pelvis into her face, Northers grabbed Miss India. She continued to tongue the lubricant out of Miss Brazil as he impaled her on his hot hard tiller. She ground against his loins, taking his manhood to the root.

The relief against pent up lust was palpable. Northers had another chance to pause and admire the action. Miss Brazil, as she ground her loins into Miss India’s face, sucked on Mils’ rod like it was a cocktail straw. Northers looked away, too aroused by the sight of Mils’ giant meat thermometer entering that cavernous mouth with those fat lips tight around the sheath. But his eyes landed on the long snaking tongue of Miss India wriggling around Miss Brazil’s fleshy bud that was blooming now with a growing urgency. It set Northers over the edge. He grabbed Miss India’s hips and thrusted, launching floods of passion deep into her abdomen His semen painted her inner walls for another of the longest, most energetic climaxes he’d ever known.

A euphoric wave crashed over him, dulling his senses and drugging his veins with adrenalin overdose. Pulling out of the juicy tunnel, he noticed everyone shifting into a more relaxed state. Poles around the room dwindled at half mast, and even Golitsyn had settled back to watch the American woman lick someone’s climax out of the great beautiful Samoan. She paused, looked up to show thick white globs settled around her lips, then pressed her face back to finish her meal as Miss Samoa whimpered with sultry gratitude.

Mils flopped in a chair next to Northers. He stared at the scene before him with wide eyes.

“Not when I have this choice in front of me.” Northers grinned.

The men laughed and reached for more vodka, allowing their strength to return.

“I’m getting ready for more.” said Mils. “I don’t care where we are, this is the greatest night of my life.”

He sat up, worked his tumid shaft and focused on the action before him. He moved toward the stage and whispered something into Miss Ghana’s ear. Compliant, the dark-skinned woman wriggled into a sixty-nine position with the Japanese girl. Miss Ghana had enormous, pendulous breasts that hung either side of Miss Japan’s squirming body. Mils leaned forward and sucked on a great dark nipple, yanking his pouting member to life.

And then something happened.

As if a secret signal went through the group, the women stood in unison, putting an end to the sexual act. The men paused. The sight of thirty exquisite naked women standing together and walking as zombies to the table in the middle of the room was too fine a sight to behold. Together, their brilliance astounded. A pulsing Vyacheslav Mescherin space tune came over the speakers, but the silenced, stupefied men gawked at the strange display. The women, mesmerised by something outside or beyond them walked in unison, driven toward an unseen master.

The women gathered in the middle of the room and climbed on the table as the men dragged their chairs closer to the make shift stage. There they watched. And there they waited.

And then, the women formed a circle, their bodies facing out, their shoulders back and their breasts high and protruding. Nipples stood firm, aroused and extended.

Northers sat next to Mils. Something wasn’t right, but he couldn’t put his finger on it.

“What the hell is going on?”

Mils had his pleasure pump in his hand, stretched to full mast.

“Who gives a fuck? Everything these women do drives me insane.”

But Northers’ gut churned. The sickness reminded him of seeing a kid bullied at school as he and the group jeered at the blood dripping from the boys boxed ears. This behaviour set his nerves on edge. He glanced at Golitsyn, pumping his fat frankfurter, drinking in the women with his mouth grotesquely agape. The women commanded everyone’s attention. Not the kitchen staff, Northers noted. They’d left for the evening. The lecherous spies were alone, each palming their man meat.

Scared of blowing his cover, Northers stroked his own half-nelson, and gave in to the arousal that possessed everyone.

At that point, something remarkable happened.

Each woman massaged her small nub. They placed their right hands on their love channel, dipped their fingers into their own juicy wetness and used the natural lube to work the little-man-in-the-boat. The music disappeared beneath the sounds of sloshes and squelches as the women strummed in unison. Soon they added moans, as each fell back, bracing themselves on their left hand, thrusting their pelvises into their writhing fingers.

Northers realised what was coming.

These women were trying to ejaculate. Hitherto the great myth of female arousal, they were about to achieve what every man no doubt thought impossible. A sprayed female climax.

Excitement tingled through his veins, overwhelming him. Sitting in his chair, his rod stretched to breaking point, he waited for undeniable proof of the greatest female mystery. Driven mad with lust, he moved closer to the table, pushing his face into the wondrous spread legs of Miss Ireland. The patch of red hair above her opening matched the red pigtails on her head. Out of the corner of his eye he saw Golitsyn move toward Miss Ghana and Mils approach Miss Samoa. Other men soon followed suit. They moved closer, peering deep, waiting for this elusive victory of nature.

Each man took a woman. He lay on her, turned her, or pushed her so he could dip his wick. Every woman had a man inside her. Each man stashed his sword in a sheath with unplanned unison.

As Northers entered the body of Miss Ireland, he felt a tingling sensation, something different to the earlier experience. She responded with gusto, pushing hard against him, but he couldn’t help glancing around the room to wonder at the spectacle. He couldn’t shake the idea that something wasn’t right. Miss Ireland’s vaginal walls convulsed with ecstasy. It was incredible. Her body sucked hard on his straw. Again, he forgot his fears and doubts and pumped his pleasure into the wet and willing hunger of the woman beneath him. He felt her warmth, her soft clear skin, and her pert small titties with their elongated nipples. For a single moment, he wasn’t afraid. With nothing to fear, he floated off to a heaven on earth.